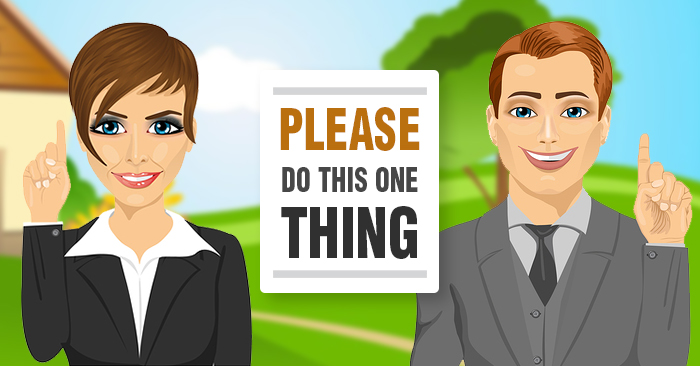 What’s your impression of a “typical” real estate agent?

Among other traits, you probably picture someone who’s extremely outgoing (in the least), but maybe even more along the lines of aggressive or pushy.

The crazy thing is that most agents are the exact opposite of that.

Most aren’t all that aggressive or pushy. And, sadly, the ones that aren’t pushy and aggressive, often struggle to survive, let alone thrive as a real estate agent.

While they may be the “top” agents, that does not necessarily mean they are the “best” agents.

Far too often, agents who truly would be great don’t survive in this business, simply because they aren’t pushy or aggressive. They fail to get enough business to make a difference in the perception.

But you can help change that, just by…

This probably sounds so basic.

How could this suggestion help change the perception of the real estate industry?

Because so many would-be-great real estate agents don’t want to bother you and ask for one. They don’t want to put you out. Maybe they just don’t feel right even asking you for one.

They may feel unworthy of asking for a testimonial. Maybe you haven’t actually bought or sold a house through him or her. Or maybe they’re very new in the business.

That doesn’t mean they aren’t a great addition to the industry, or wouldn’t do a better job than some of the top producing agents.

But it’s hard for them to provide much “proof” that they are worth hiring.

Think about how much we all rely on reviews for even the simplest of purchases nowadays. You almost have to try and not read reviews to help form your decision on a purchase, or even a place you are going to eat at.

The same goes for real estate agents. Reviews and testimonials help. A lack of them can hurt.

And every agent has to start somewhere. And that somewhere is with very little proof that they are a good agent.

And the proof most people look for is evidence that the agent has done tons of business.

But to get tons of business as proof, the agent almost has to be pushy and aggressive. And, if they aren’t, then they don’t get enough business to stick around long enough to gain proof on their own.

So, you can help the cause by simply going to bat for an agent you know, who may just not be super aggressive or pushy. Who may in fact be so humble, shy, or unaggressive, that they’ve never even asked you to write them a quick testimonial.

So, please take this article as a request on their behalf.

Would you please write the agent you know a testimonial, and give him or her a better chance at sticking around long enough to change what you picture as a “typical” real estate agent?

(Unless of course you like and want to deal with pushy and aggressive agents. In that case…carry on.)